Marjan Moghaddam: The Early Pioneer of Digital Art on SuperRare.com 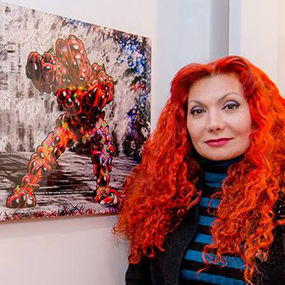 Marjan Moghaddam is an award-winning, pioneering, digital artist and animator, who works primarily with 3d CG and digital media for animation, NFT, Net Art, print, sculpture, installation, and AR/VR. Known for her original, unique and influential style of 3d figuration and animation, she is considered as one of the top female 3d CG artists in the world, and has been exhibited extensively at international galleries, museums and media festivals, in addition to curated exhibits at the Armory Show in NYC and Art Basel Miami. Ms. Moghaddam’s work has also been an official selection of the prestigious Siggraph Computer Animation Festival and art gallery (the world’s top CG festival) a total of 4 times.

Marjan is a recipient of numerous grants for her innovative and cutting-edge art, such as Rockefeller Fund, NY Department of Cultural Affairs, Brooklyn Arts Council, and the Experimental Television Fund. Marjan was also the featured artist for the launch of DOTCOM Gallery and International Forum for the Digital Arts in 1996, the first internet based digital art gallery in NYC, sponsored by Prodigy Inc. Her animations have also been the official selection of numerous international film/video and animation festivals throughout the years. Marjan is also a popular and prolific public speaker in the digital arts.

Hailed as a “trailblazer in the world of digital art” by the International Herald Tribune, and “the First Lady of Animated Painting” by the Examiner, her most recent collection of #arthacks have gained major international recognition in the press and gone viral with millions of views on top Instagram and Facebook Art Channels. Marjan started her conceptual Net Art project on Instagram in 2016, by hacking her #Digitalbodies into found and shot exhibition and art fair footage online. Her intention was to redefine form for digital art, radicalize curation, democratize the exhibition space, and intervene with her critical discourse, or as she states: “To hack is merely transgressive, but to do so with a critical dialog is transformational”, she explains. A survey of over 4 decades of her pioneering digital art and #arthacks is currently spread across 3 spaces at the Museum of Contemporary Digital Art in Decentraland as a solo show during Summer 2021.

Marjan’s AR art has been exhibited widely at galleries and museums, including a Chronometric Sculpture for the Smithsonian Museum commissioned from the Halcyon Foundation. In addition to other public art projects in the US, she is creating both physical sculpture and AR experiences for the Hillsborough Castle Park in the UK, Snap 3.0 in Orlando and Scandinavia’s first Virtual Park in Oslo. Her AR and Mixed Reality art made the Best of List for Forbes in 2019, and she was Adobe’s Artist-In-Resident for Aero.

Marjan has also been creating Crypto Art and selling to top collections on Superrare since 2020, in primary and secondary markets. She was the woman artist featured between Beeple and XCopy in the BBC Click documentary Art Goes Digital and is one of the artists in the Proof of Art: History of Digital and NFT art at the Francisco Carolinum Museum in Linz, Austria, the first NFT art museum exhibition. This summer a retrospective of her work can be seen at a solo show spread across the entire second floor of the Museum of Contemporary Digital Art in Decentraland. In addition to several major virtual NFT art exhibitions in Cryptovoxels and Dencentraland she has major drops with the Art World’s first NFT from Unit London, Institut, this September, in addition to Star Chamber Drops with Superworld App, Fantom Blockchain $ZOO, and Superchief NFT art gallery in NYC. This July she is part of the SuperRare, Vellum LA and Standardvision NFT drop at the LA Art Show. Marjan is a political refugee and immigrant from Iran, and lives and works in Brooklyn, where she is a Tenured, Full Professor of CG, Animation, and XR at LIU.